Of course when it’s your favorite youngest daughter, how could that be a wrong choice !

In all the years I was at home, I never knew who my dad voted for.

When we kids would ask him he would say “The constitution guarantees the right to a secret ballot.” and that’s all he would say.

Sometimes he would say he voted just to cancel out my Mother’s vote, but he was always a joker.

Here’s to a secret ballot.

I stand with Hong Kong

We happened to take the train down to Union Station to ride our bikes the 40 miles home. I should have realized something was up when our normal solitary Saturday train ride was filled with young and old – wearing checkered lime green shamrock suits and leprechaun hats.

When they say they make the river green…. they’re not kidding.

Nine AM in Chicago…

When you read about St Patrick, you would think his celebration would be more pious. As we pedaled up some of the closed streets we could hear the people in the bars celebrating. At 09:00 am, I was just glad they weren’t on the road while we headed home..

september in the prairie

When I moved from Ohio, I missed the trees and hills. Yet, I’ve grown to find the prairie pure, abundant and ever changing. This section of Springbrook park was burned completely down last fall, once the lightning storms and the Indians renewed the prairie this way. In one spring and summer the prairie returns verdant and full of life.

renewed and full of life

As we cycle this path, every day its newness is a gift.

heroes on the high speed train in france

I’ve ridden the TGV in France more than a few times. All I can say today is thank God for heroes.

lookin for stories
be back when…

a cycling day in Chicago

We hopped the train to downtown and just outside of Union Station is Lou Mitchel’s restaurant. Since 1923 Lou’s has been at the start of famous Route 66, that American mother road connecting East to the West during the dust bowl ( 1930’s ) as people migrated to California hoping for new chances and prosperity.

A Chicago Institution since 1923 – worth the stop

Route 66 has long faded, replaced by the super highways that bypass the small towns, but Lou’s has kept some old traditions. You get a donut hole ( baked there ), a complimentary orange slice and prune with breakfast, and a free tiny serving of ice cream after your meal. 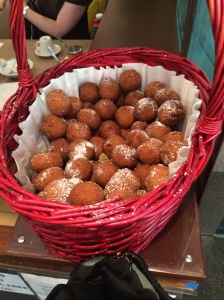 these are some seriously fine donut holes

We had omelets which were light and fluffy, but the whole-wheat toast baked there was sublime. A bite of omelet, a bite of toast, a sip of fresh squeezed orange juice… life is good. 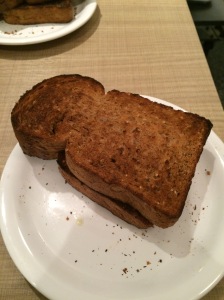 Kingly toast – on their own bread – no need for jelly or jam – just a bit of butter.

With a bit of ice-cream to cleanse the palate we were off. Chicago has adopted some European ideas for bike lanes and in many places the bike lane is next to the sidewalk inside the parking lane. This creates a wall of parked cars to protect cyclists – and I felt safe on those roads. We headed over to the 606, a new elevated bike/jogging/hiking path that runs over the streets. You can cycle for forty city blocks without a light or car nearby. It was one of the best planned paths I’ve seen – and at $95 million to complete – it’s certainly costly. But it makes Chicago safer and better for living. 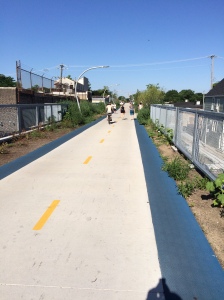 Heading North about 35 miles through the luxurious Evanston and nearby burgs along the lake you view awe inspiring houses but we had The Botanic Gardens and butterflies in mind.

The butterfly house at the Botanic gardens

Then North another 15 miles for lunch…

Then ten more miles to the train-station and home. Chicago is a cyclist’s friend.

the katy trail is like a collage –
It’s Indigo buntings, and more cardinals than you’ve ever seen
It’s great owls that take off ahead of you like eagles
and eagles soaring overhead 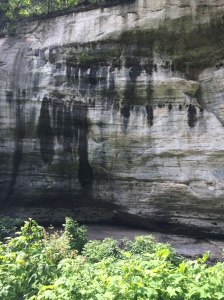 Towns that vanished leaving just traces when the
railroad failed…. bridges made 100 years ago 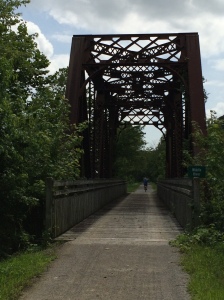 It’s mosquitoes – turtles and frogs that serenade you…
and jump 15 times their length to get out of the way
it’s humming birds, and dragonflys that dart
like birds and pebbles that fly to life – butterflies
or salamanders or lizards as you approach

I always stop for turtles…

The Katy trail is smiles from most everyone you meet
for I suspect I was smiling too,
even in the Missouri heat.

dining in the shadow of lewis and clark – cycling, travel

The book “Undaunted Courage” chronicles the 38 man Lewis and Clark expedition to new and marvelous places. Some 200 years later on my bicycle I chanced to follow their steps for nearly 200 miles along the mighty Missouri river.

Expecting to live off the land, Clark and his crew were all expert hunters and brought with them 400 pounds of lead to make bullets and the following food supplies:

The expedition also traded with the native Indians for squash, venison and fish along the Missouri, but after thirty miles on the trail we found “Trail Smokehouse” – and learned Missouri is barbecue.

Missouri knows BBQ – and this pulled pork was perfect

Funny how a great sandwich and a glass of dark beer can energize a fellow. The river was very high, and one section of the trail was flooded taking us about five miles around through mud and water before we finally rejoined the trail. At the end of the day nothing says sixty miles through 90 degree heat like a frozen Margarita.

makes the heat an ancient memory

In the morning it was waffle house and grits… ( I was born in the South after all ) It reminded me of Lewis writing in his journal about using the last of the butter, or his first taste of buffalo. Near Rocheport where the eagles and hawks soar over the river near the cliffs you can ride up, park your bike and get a fresh pizza made in his outside wood oven.

The expedition found the bugs so thick that they often smeared their skin with grease or sat in the smoke of their fires. We had deep-woods Off, but this little gem of a restaurant had tents for shade, and giant outdoor fans to create a gentle breeze to keep the heat and bugs away. 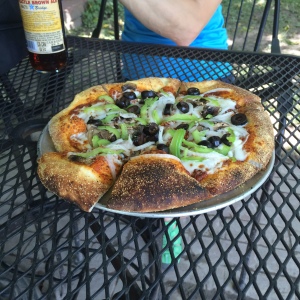 Clark’s team went through lean times, where they were forced to trade for horses and dogs from the Indians to eat, or the river was so dangerous that they had to wait until it subsided before continuing on. We had missed the rain, but the river was racing by full of trees and other obstacles. It wasn’t all hard times, when fruit and berries were in season, Clark and his men enjoyed berry tarts, or Morel mushrooms. Near Jefferson City after the hottest day we found a little place “Prison Brews” with a motif like an old prison. In it they brew some fine beers, but most importantly – make their own root-beer. I had that first.. what a way to start a meal. 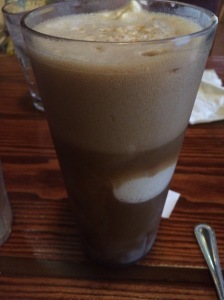 They had a fine Stout that Jan enjoyed and my Blue Cheese Burger proved, life in Missouri can be pretty fine. 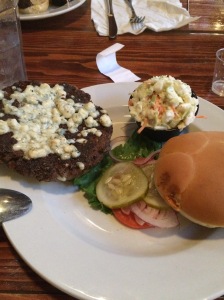