The days in France are lazy and relaxed. In the mornings my daughter and I get up, feed the ridgebacks fresh tripe and take them for a walk. We take several trips as holding more than one of these big boys when they see a rabbit is not so easy.

Then it is back for a croissant, with a dab of freshly made fig jam and some melon and possibly a yogurt. If we aren’t making a trip, my daughter and I cycle into the nearby town for coffee or hot chocolate and some people watching. We come the back roads passing vineyards and orchards. As we coast along the river, the shade from the wild fig and jasmine trees cools us and the combined aroma is a delicate perfume.

Irrigation ditches abound, many dug by the Romans during their occupation and remain a great benefit, longer lasting than pax romana. Just on the outskirts of town we see the communal area where women would bring their washing. Not that long ago many towns used these areas including one nearby place which only received indoor running water in 1964.

My daughter, a visitor for some months with my sister, steers us down an alley to a gate in front of a nice driveway and building. There a cast iron spider glares at us, a deterrent aimed squarely at the Gypsies. In this area with the camps full, theft is common, although my sister’s five eighty plus pound Rhodesian ridgebacks ensure her compound remains unscathed.

we ride into town

The evil eye to deter theft

Then it is off to the square, or round about where we take a table and sit in the shade of a canvas umbrella and sip coffee or hot chocolate. 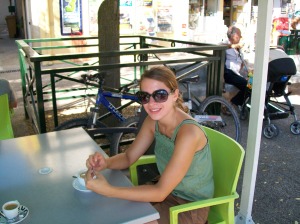 Behind us, four or five older gentlemen chat, playing cards when a young mother with a stroller rolls up, says hello and then leaves her child sleeping peacefully in the stroller under their care while she goes into the little pharmacy. My hot chocolate is very good, and it still surprises me to see Megan drink coffee. It seems only yesterday she was a small child. We watch and chat, a cyclist in bright spandex zips by silently as he effortlessly circumscribes the circle. He is followed by a grandmother on her scooter, her white hair blowing merrily in the wind.
There is no big box store, although they are some miles away, here the pace of life is for the living.

a jaunt to pamplona

From Avignon in Southern France to Pamplona, Spain is about eight hours by car.  When my daughter and I found out that my brother in law would need to drive down to a dog show by himself because we were visiting, we decided to tag along.  Next morning, after fresh croissants from the bakery, we loaded our bags into the LandRover Defender and diesel humming away we went.

Avignon has blue skies like Montana with mountains on the near horizon. We are surrounded by orchards and vineyards and fields of melons that smell so sweet that just by being near them, I can close my eyes and savor the glorious scent. We roll down the rural one lane road past the bounties of the land, past the camps of gypsies who have summered here since the Pope gave them right of passage centuries ago. The sun rises and warms us, as we roll down the road past cyclists and tiny Renaults. We are soon on the toll road and on our way to Spain.

Our little company consists of the three humans and Scion, a large male Rhodesion Ridgeback, already a champion of Europe, Lilly, the youngest member of the pack, who is always at the heart of mischief but escapes punishment with her sweet disposition, almost as if she says, “who me?” with her dancing eyes.

Lilly in the defender.. all sweetness, no mischief

We continue our trip south, and pass a site where there are cave paintings. My one regret on my stay was that I did not stop there, but perhaps next visit. We stop for gasoline and try the prepared sandwiches which again are excellent and are on our way again. We pass mountain villages, fortresses as we wind our way toward the mountains. One rest stop boasts a tribute to the Tour De France.

Tribute to the mountain Stages of the Tour 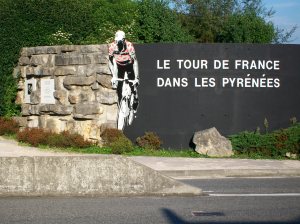 We arrive at Pamplona at dusk, the city lights sparkling on the mountainside as our defender chugs up towards them.

One checked in, the dogs in the rooms we head down to the restaurant for dinner. It is recommended that Spanish beers are good, so we agree on a beer for dinner. We share a calamari as an appetizer and I have a salad with goat cheese, which is delicious. The goat cheese is baked and comes out with a brown crust that provides just a bit of resistance before the melted smooth cheese runs across your tongue. I order a steak, and it arrives seared to perfection with just the right amount of red in the center, and a sprinkling of sea salt crystals on top. A bite of salad and goat cheese, a bite of steak, a sip of beer, what a way to end the day.