We got tickets from a vendor to see a hockey game, Chicago Blackhawks vs the New York Rangers. As the merger winds down, this might be the last of the perks. The suites are a long way from the ice… 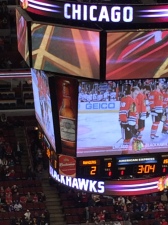 But when the ‘Hawks score, there’s more room to dance around and sing the celebration song with twenty-thousand other people. 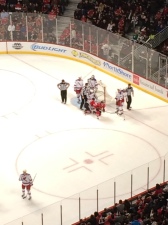 congestion in the crease

And while the food in the booth was good, ( I had four bratwursts with carmelized onions ), the dessert cart was outstanding.

don’t miss a chance at the dessert cart!

Alas, the ‘Hawks lost, but it was a great night to be a hockey fan.