After an almost endless winter, on the first good day we took the train downtown for a road trip.

We got down early enough so the traffic was light and the drivers are cycling tolerant but those little bike lanes make city cycling exciting! As the city wakes, the energy is incredible.

past all the crazy down-town riding to the fun

There are so many things to see – we rode past a rugby team practicing, then along the beach front “Gold Coast” just full of young people and dogs strolling, jogging, riding, fetching – every possible combination.

I saw a woman body builder riding, and secretly coveted her triceps and her small stomach 🙂 We lunched at Super-dog, a wonderful one of a kind hot-dog place Chicagoans so love – there we saw a group of Hispanic kids acting like Hells Angels on their souped up mopeds.

We passed a cancer walk, and a bike race, and a run for charity and if you ride far enough, a temple. 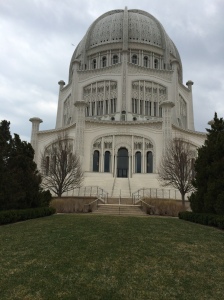 We saw a model in a diaphronous gown posing in the wind at the waterfront – holding a yoga warrior pose while her gown danced in the wind. When we rode by and the photographer had to stop, she told us “Thanks that pose was killing me”

We passed a sculpture park, where we saw Adam and Eve and Martians – Skokie has a park that is full of modern sculpture making statements even I could comprehend.

Adam, Eve, and me. Sculpture parks satisfy that need to touch…

but the image that stay with me — a little girl, perhaps three or four standing in the woods before her mother playing her tiny violin. Chicago is unusual in all things. I needn’t have ridden 62 miles to discern that, but like the woman cranking her wheelchair bike over the hill – some journeys are worth the effort.

My youngest favorite ( as opposed to my oldest favorite ) daughter found a restaurant, and it took her about a year to convince me to visit it with her. How sad we can never recapture those lost days. The restaurant is “The Publican” and it is one of the fine places in Chicago to dine.

The first time we visited we sat in the public seating, row tables where you sit elbow to elbow with whoever happens to occupy the adjacent seat. That day we sat next to a single English lady who was visiting a friend here. She told us confidentially, “My son’s a chef in England and he said if you had to eat at one place in Chicago, it’s The Publican.” I don’t think I can say it better than that.

The Publican is famous for three things, oysters ( which I generally avoid ), Belgian French Fries ( cooked in duck fat which I adore ), and pork belly ( cooked in wonderful sauces which is irresistible. )

Fries cooked in duck fat, eggs with a soft yoke… 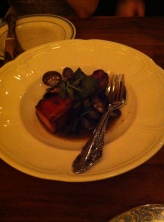 Beets were served with crumbled cheese and nuts and a blueberry sauce, ( but that was eaten before a picture could be snapped. )

If you get the chance, The Publican is worth a stop.

So Monster ( his cycling club nickname ) and I decided to try Mexican for lunch. END_OF_DOCUMENT_TOKEN_TO_BE_REPLACED

I had lunch with one of the life changers today. END_OF_DOCUMENT_TOKEN_TO_BE_REPLACED

Hobbits, those imaginary fellows invented by Tolkien, used to enjoy breakfast, and then second breakfast. END_OF_DOCUMENT_TOKEN_TO_BE_REPLACED

A leisurely meal at Chef Amaury’s 33 West in downtown Aurora Illinois. A meal shared with the one you love always tastes better. Pictures complements of my wife’s iPad END_OF_DOCUMENT_TOKEN_TO_BE_REPLACED

We were a good rugby team, the Chicago Lions were elite, the best in the nation. The previous year we had nearly beaten them when they came to play us. Now we loaded up on the bus for the trip four hundred miles west to return the favor. END_OF_DOCUMENT_TOKEN_TO_BE_REPLACED

Spring has arrived in Chicago…