cycling back into time – rootbeer

If you start in Naperville Illinois at the crack of dawn and head toward the Fox River bike path, you’ll catch the mist rising above the ponds. Then Northward bound along the mighty Fox river the daffodils burst into sight and the frog princes croak their song of undying love to all the frog maidens as you silently pedal by.

Up near the Wisconsin border in Richmond after sixty miles or so along the path you’ll find a small fast-food joint still attended to by pretty teens who’ll take your order and bring you a hot-dog or a rootbeer and a smile. It was a long day riding, about 73 miles total and I hadn’t seen a Dog N Suds since the 1970’s. We pulled our weary seats in and enjoyed a root-beer as celebration of a day well done. 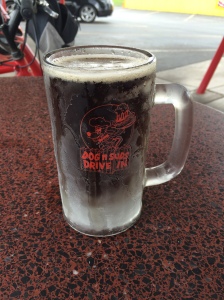 It was 1973 she was sixteen, I was seventeen and her first real job was car-hop and the local Dog N Suds. That year root-beer was the taste and flavor of youthful romance. She brought the root-beer out in a frosted mug ( just like the old days ) and it was lightly carbonated, slightly sweet with just a hint of licorice, just as good as I remembered. I told the story to our server, did we look so young at sixteen too, and she smiled and told me there were only a handful of franchises left in the whole country, a place of distant memories and tastes. 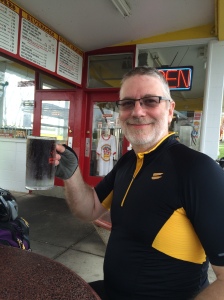 a sip of tastes from the past