I was at a funeral a while ago, and someone spoke out of the hurt in their life from the deceased. I thought of Klingon revenge “A dish best served cold”, but wondered at the aftertaste.
There was pain, real pain there. I hoped for healing, but healing is hard to get from death. Perhaps forgiveness would better serve.

Rage hurt and anger dig deep inside us. They can fuel us in a crazy manner, great for sports like rugby or martial arts. However, in the end they own us and the person who harmed us takes something, controls something, our ability to experience joy. I think only forgiveness releases joy.

It’s strong medicine admitting we were wronged or hurt. The consequences of the action from the law, the world stand beyond our control. But if we can forgive we take back the ability to see them or not for reasons of our own. Our lives flow forward, nothing expected, just a free future.

Forgiving is something we do, we need no one’s permission or even their presence. Sill, make your peace while others are here. Too often I have seen the weight of words unsaid.

Forgive often, and let your full life be your revenge. Soon there will be no revenge, just joy.

Not much use in a gun fight. It requires lots of space to swing an seven foot trident about. I suppose a police report might read, both the chandelier and the burglar were rendered inoperable, but a properly trained martial artist can use a tiger fork to disarm a swordsman. Catch the sword in the down stroke, one twist sends the sword flying, the other end of the trident sweeps his feet out from under him and a quick flip of the giant spear and the downed adversary can consider the point of rising, or not.

When Sifu Mohr drilled us over and over on its use like so many martial artists I would imagine fighting a real tiger. But there are no tigers in the US. Instead I imagined fighting a mountain lion in Wyoming. I studied them and their habits. Mountain lions prefer stealth, and if my blood didn’t turn to water seven feet of spinning steel might just send one deciding on a different venue for lunch. I never saw a mountain lion near our cabin and in fact I never took the tiger fork anywhere but class and the back yard. Still I had many battles, some of which I won and others….

The tiger fork has spent many years tucked in a corner of the attic. In fact when I hefted it, I was surprised how heavy it is now. It’s really just a possession, one that I care about, but it owns me as much as I own it.

We are moving to a smaller place. One where a tiger fork would be an encumbrance. I’ll keep it to the last day then we will both be free.

I was going to go political, and wax upon how wrong it is when the head of a government agency lies to congress and doesn’t lose his job, and has built a spying apparatus to uncover every secret. Think it has oversight? How did one admin get all those documents and cover his tracks so they still don’t know what he took ?

I might write about what life under a government that has a rogue agency and president that can blackmail any politician or prime minister might be like. I guess people get the government they deserve and accept.

Traitor or hero, Snowden warned us how far beyond the law our government has traveled.

But instead, I think I will write about a snack we just shared. 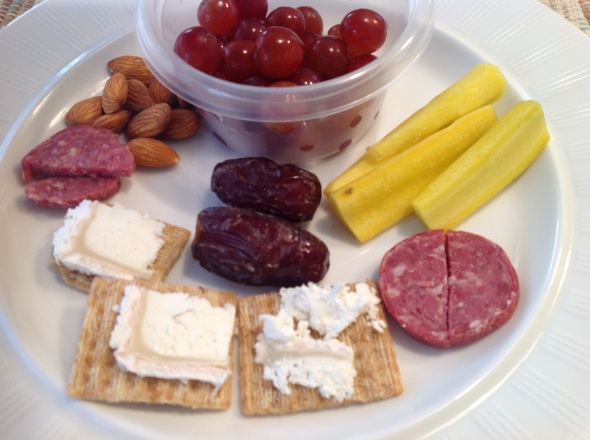 Whole wheat crackers from Trader Joe’s, baby buche cheese from Mackenzie Creamery in Cleveland, Elk sausage – delicate and light from the Shaker market, grapes, almonds and fresh yellow carrots from the market. Split a Guinness, a bite of cheese and cracker – a nibble of sausage. A carrot and a grape and repeat. Of course save the dates for last.