at the barricade – tour de france

The last several kilometers of the race are fenced off, and the finish is lined with a barricade with sponsor logos. This is a virtual city, planted on top of the mountain, and destined disappear hours after the race completes and reappear at the next race.

The VIP’s are on the right, helo’d up or bussed up and share semi-truck trailers that magically turn into restaurants and vantage points. On the left are the everyday people of France who have hiked or ridden their bikes up the steep seven kilometer final ascent to watch one man conquer the mountain.

It has rained all day and mud is everywhere, but the people are polite ( except for a few on the VIP side ) and we have stood for hours 50 meters from the finish waiting for the riders while Jazz and up-beat music plays in a mix of French and English. We watch the race on giant televisions, and periodically the announcers wildly, emotionally explain the race in French. The great Contador has crashed and must abandon, and the crowd murmurs.

There are children here, dogs, hikers, bikers and people dressed up in all manner or costumes. They picnic on the back of semi-truck trailers but when the riders approach the final summit, the thousands of people who have lined the route cheer wildly.

Near the finish, two riders approach the top, an Italian and Pinot ( a local boy ) as they come to the barricade we cannot see them, but we hear the roar, and the thunder of the people pounding the barricade a thunder that rolls forward with them. These men are suffering, pushing through pain and the people cheer wildly. Pinot cannot do it, he is spent, he cannot overcome the mountain and takes second. The third rider approaches, then more and every one is cheered wildly.

This is the magic of the Tour de France.

One of the beauties of France is its honesty. Rich and verdant, we came to visit the tour de France 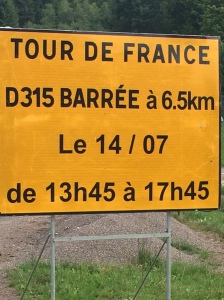 the promise of cycling and racing

Few things surpass butter from Normandy with sea-salt on a fresh baguette from a visit to the local bakery. 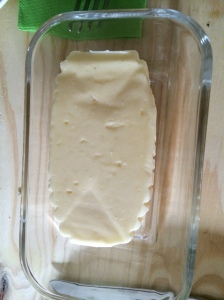 Butter from Normandy with sea-salt

We are enjoying a world that still loves the table… It might be from the Champagne Les Brun Servenay ( light and dry and perfect ), or in the foi gras with sea-salt and a touch of apricot jam, or the chicken spread which prepared with duck fat, or the olive tapenade with a local cheese melted over it 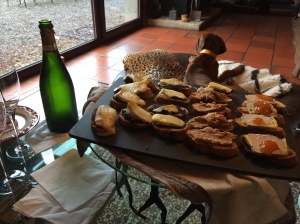 The table is a beautiful thing

Some things in life cannot be hurried….

Wishing you the luxury of time….

suffering at the tour

My wife Jan and I are big Tour de France fans. From the onset, the tour has been beset with scandal and scoundrels, but I count the two thousand mile race across France as the most arduous sporting accomplishment possible. To complete this race that climbs mountains on will power and descends at sixty miles an hour on two wheels requires embracing suffering.

An online friend recommended “Hell on Wheels” a movie about the tour, and features two riders from the Telecom team who are past their prime. One a great sprinter trying to remain relevant, and another a climber as they face the hardship of this twenty-one day test.

Near the end, one gentlemen, probably a coach presents a soliloquy on the commitment to succeed from a small chapel in France that has been converted to a cycling shrine:

For me, suffering has two meanings.
Suffering can be negative.
If you try to suffer for its own sake,
that’s bad. That’s unhealthy.
There’s something wrong in your head.

But when you talk about suffering that
you must get through and you can
survive through enormous effort,
that is something else. That is positive,
good and beautiful. Beautiful because you
think of courage, of stamina, loyalty,
the willingness to make sacrifices, modesty and love.

From this perspective, the suffering during training,
during sporting competitions, while doing one’s job,
which all require great effort, is the same as religious
suffering. It is love. It is beautiful, I like that.

Delivered in French of course – so it is full of passion.

May you sacrifice and suffer with passion for a higher goal.